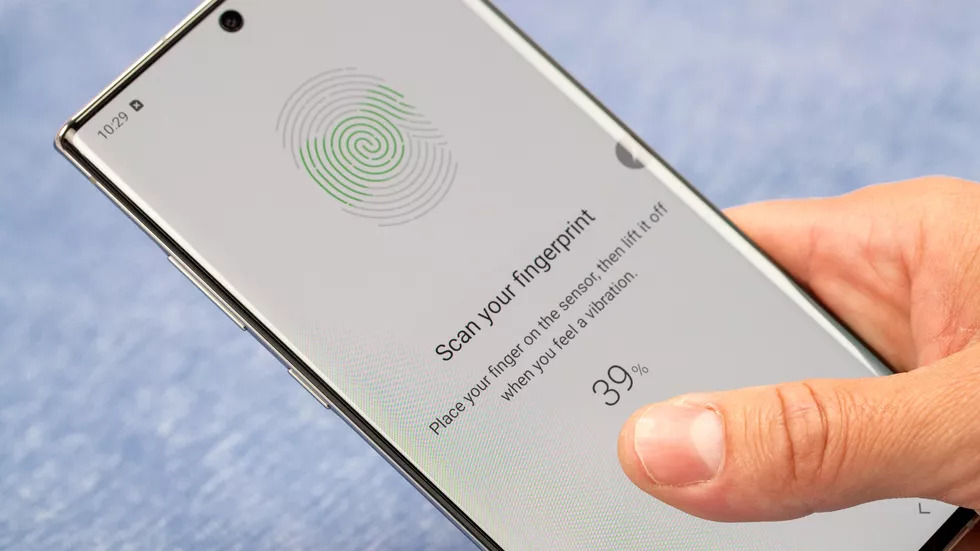 Samsung has been introduced the world’s first Ultrasonic Fingerprint sensor with S10 series except for Galaxy S10E. The technology promises to be extremely accurate secure in speedy, unlocking your phone almost instantaneously it won’t matter if your finger is greasy, sweaty, wet or tacky and you won’t have to blindly fumble around trying to find the target on the back of the phone.

The key to all this is your fingertip which just like a regular key has all these tiny ridges and valleys that from a unique pattern that only you possess.

Qualcomm ultrasonic in screen fingerprint reader claims that it will do a better job unlocking your phone by mapping a 3D image of your print using sound waves, so how does it work and why is it considered better than an optical sensor that’s already on some phones.

Optical and Ultrasonic fingerprint readers both start with the sensor just point 2 millimeters thin that’s located several layers of technology below the surface glass. When you touch the glass your finger sends a tiny electrical pulse that wakes at the sensor to scan your print.

Now the important part is how that sensor perform the scan? An optical sensor basically takes a 2D photo of your fingerprint, it uses the display to light up the area around your fingertip and sends up a light wave that hits your fingers ridges and valleys before bouncing back down to the sensor below. The data is then interpreted as a fingerprint that the phone will match to the one you already have on file, an ultrasonic sensor, on the other hand, is different because it uses high-frequency sound waves to detect the details of your fingerprint.

This similar to the ultrasonic technology that generates pictures of babies in uterus and it’s also related to how dolphins emit sound waves to locate their prey.

On the phone it works like this you touch the screen the sensor wakes up it sends sound waves back up to your finger that can read 4 millimeters into the outer layers of your skin because sound waves can penetrate through liquid it will work even if your finger is wet or gummed up with lotion or french fry grease. When the sound waves bounce back down the sensor module converts those wavelengths into electrical signals that are then used to identify your fingers ridges valleys the finished product is a details 3D image that is theoretically harder to fool than optical sensors.

Also, phones that use an optical sensor can take up to a second to unlock rather than verifying your identity in under 200 milliseconds like an ultrasonic sensor can but, these ultrasonic fingerprint scanners have an important limit they will only work with flexible OLED displays and for now those are only on certain high-end phones. As all a displaysget cheaper, it’s possible that Qualcomn technology will make its way to more phones.