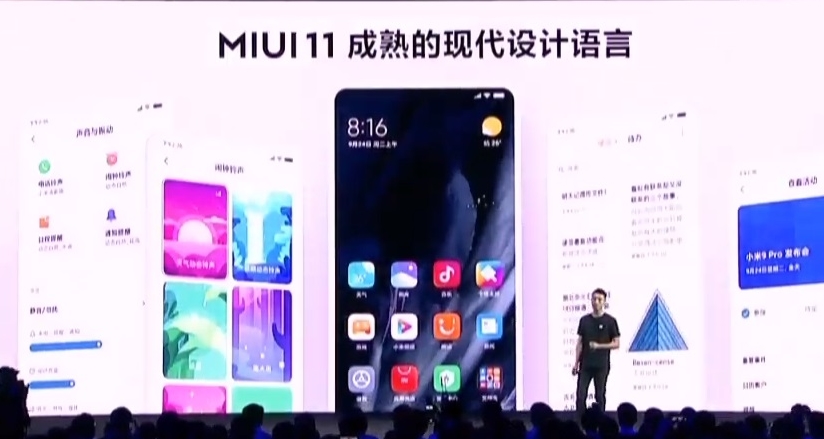 
MIUI 11 official now based on Android 11. We will be going through the main design aspects and touch upon the features that are likely to make the final cut.  In this article, we are discussing What’s New in MIUI 11?

MIUI 11 will see a new Animation. There’s nothing to comment as they are apparent to your eyes.

The icons and the overall UI elements get a rounded look. Another nice addition is the option to customize the notch area, a feature which is borrowed from other Android skins like Oxygen OS.

The Dark Mode on MIUI 11 gets a scheduling option wherein the phone will turn on dark mode automatically based on preset times.

With the MIUI 11 update, the native apps also undergo a visual overhaul.

MIUI gets an app drawer, something we believe the fans would appreciate. For a long time, Xiaomi phones traditionally housed the icons on the home screen. This spoiled the whole home screen landscape for some users. Starting MIUI 11, you should be able to access the apps organized alphabetically in a drawer by a simple swipe up. There is a dedicated recent apps panel above the “All Apps” section.

Cast lets you share your phone screen to any external monitor. It is augmented by the Demo feature, which lets you cast documents, photos, videos, games, etc. You can minimize the casting window and use it even while the phone display is off. You can access the Game casting option whilst playing games within the Gamer Turbo.

Another handy tool would be the new Ultra Power Saving mode. A feature, found in Samsung phones is set to make its way to MIUI 11 on Xiaomi phones. This is crammed within the Mi Security app.

Once activated, you’ll have a black screen with a very few selected apps at your disposal. This should prove a saving grace in squeezing more battery life.