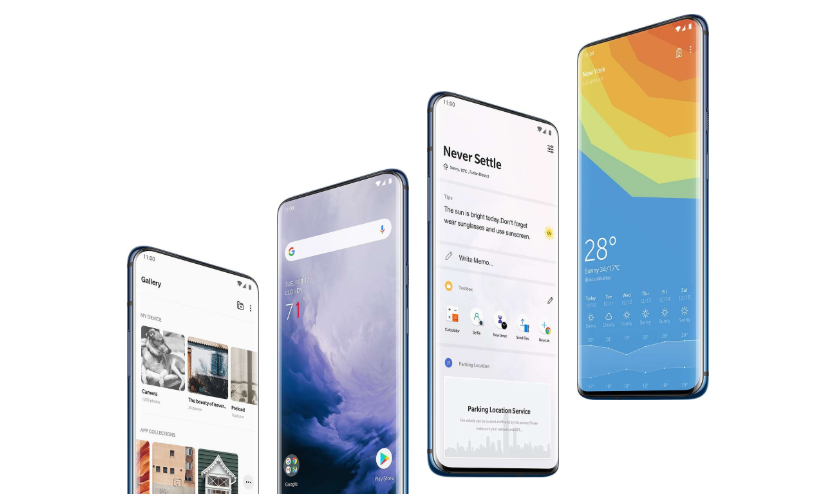 
OnePlus has decided to change that this year and has successfully launched its flagship OnePlus 7 Pro, which the company calls its ultra-premium smartphone.  In this article, we are discussing Oneplus 7 Pro Review.

So let’s start off with the design first so as you know Oneplus 7 Pro launched with three color variants including Mirror Gray, Nebula Blue, and Almond. all three colors are good. and when the back is still glass and it has beautiful looking for the matte finish the subtle gradient and the premium finish give this phone a gorgeous look but what’s even better is the front, yes this looks amazing doesn’t it go at the notches and the Oneplus 7 Pro has a bezel-less display. There’s still a very tiny chin here but trust me when I say that this is truly bezel-less and beautiful and that is thanks to this popup camera this is a camera that you’ve seen in vivo and oppo phones but it seems pretty fast when it comes to popping up.

if you are wondering about the popup camera durability, According to Oneplus Oneplus 7 pro is that the pop-up camera mechanism has been tasted over 3 lakhs time so I should be fine.

Anyway, the size of the display is curved. It does add a lot of personality to the phone and I think this makes the phone’ display look a lot like Samsung or Huawei flagship right now.

Now all that is good but since Oneplus 7 Pro has a bigger battery and bigger display this means that it’s a slightly hefty phone. OnePlus 7 Pro weight is 206 grams. and that means it’s not a very lightweight smartphone here’s the weight. OnePlus 7 Pro is heaviest smartphone compare to other flagship phones like Galaxy s10 Plus, Huawei P30 Pro and iPhone XS Max. It is not a big problem but this is a big and hefty phone.

The beautiful design with this gorgeous display of OnePlus 7 Pro makes this smartphone best. The display here is one of the biggest changes in the OnePlus 7 Pro from the past Oneplus flagship

Starting with the screen, the OnePlus 7 Pro features a 6.67-inch full Fluid AMOLED display that comes with a QHD+ resolution and refreshes rates of up to 90Hz, which is the first device from OnePlus.So that means it’s sharper and definitely better looking than the displays on the older Oneplus smartphones. This new display is claimed to be super smooth and bright with a pixel density of 516ppi and is also said to provide immersive gameplay or video playback in ultra high resolutions. The Fluid display represents smoother animations while scrolling and opening your day to day apps, according to OnePlus.

We have been wanting a QHD+ display on the Oneplus flagship and we finally get. there is an option here to set the resolution to auto or 1080p to save up some battery life. Anyway, Oneplus did not just stop at QHD+. The display here is called fluid ambulant because it also has a high refresh rate of 90 Hertz. People are aware of the higher the refresh rate the smoother the content will look. Now the 90 Hertz refresh rate is not something I can show you an article. In fact, you have to use this phone to see its effect. But I tell you this the 90s refresh rate it makes everything smoother the UI, the transitions everything.

TO honest you won’t notice a huge difference straightaway while just suffering through the UI but when you switch back to 60 Hertz you will realize how smooth ninety Hertz makes things. It’s impact is obviously more noticeable in games. Now there is an option to set the refresh rate to the standard 60 Hertz if you want to save some battery.

Now paper this seems like a major upgrade. Oneplus 7 Pro takes a good photo when there’s good lighting even in low light the wide f/1.6 aperture captures in a lot of light. Usual photos seem nice but strangely the portrait mode of Oneplus 7 pro is not good. Now there’s also the wide angle camera here and I quite like the photos.

As for the video recording, the OnePlus 7 Pro rear cameras support 4K recording at 30/60fps and super slow motion recording of up to 1080p at 240fps.

On the front, the OnePlus 7 Pro features a pop-up selfie camera in order to achieve the full-screen display. The pop-up front camera comprises of a 16MP Sony IMX471 sensor with an aperture of f/2.0. The selfie camera comes with EIS support and can record videos up to 1080p at 30fps. And it takes a good selfie.

Overall I like the camera performance of Oneplus 7 Pro. It’s the ultra wide-angle camera and a 3x optical zoom camera is pretty good. but 48-megapixel primary camera really not good.

OnePlus 7 Pro has always the best hardware wellOnePlus 7 Pro isno exception. The OnePlus 7 Pro packs in some powerful specifications that include the latest Qualcomm Snapdragon 855 SoC, which is an octa-core processor which is built on a 7nm process and has clock speeds of up to 2.84Ghz and comes equipped with Qualcomm AI Engine as well. As for intensive gaming, the OnePlus 7 Pro comes with Adreno 640 GPU.

OnePlus 7 Pro is the first phone to pack in UFS 3.0 storage. UFS 3.0 means fast reading light speeds and lower power consumption so it’sway compared to your phase 2.1 which is used in others phones you have UFS 3.0 is2x faster so it’s a good move from Oneplus to include UFS 3.0 storage in the OnePlus 7 Pro.

The OnePlus 7 Pro is also focused on gaming with a new gaming mode that brings in some new features along with a new and improved haptic vibration. OnePlus has equipped a new X-axis motor to provide different levels of haptic feedback during gaming sessions. For improved gaming experience, OnePlus has equipped a 10-layer liquid cooling system that prevents overheating for longer gaming sessions.

In terms of storage, the OnePlus 7 Pro is offered in three different storage variants that include 6/8/12GB of RAM paired with 128/256GB of onboard storage respectively, which is also UFS 3.0-based, which means it tends to have faster data transfer speeds.

Under the 90Hz display is another optical fingerprint reader, which returns after having debuted on the OnePlus 6T. An optical scanner means there is an image sensor under the screen, and it peers through the display pixels to read the ridges and valleys of your fingertip. Just like on the 6T, this is completely invisible when the screen is on and doesn’t affect the display quality.

The first-generation in-screen fingerprint reader worked decently on the 6T, but it was a few beats slower than the traditional, back-mounted capacitive sensors that had shipped on phones before. Luckily OnePlus isn’t just shipping the same sensor package as on the 6T; the 7 Pro has a bigger, better, faster optical fingerprint sensor. OnePlus says the new fingerprint scanner on the OnePlus 7 Pro is 36 percent bigger than the scanner on the OnePlus 6T. It’s also faster—it reads a finger in 0.21 seconds, which is an improvement over the 0.34 seconds on the OnePlus 6T. The in-screen fingerprint scanner is now just as fast as a capacitive sensor, which is often quoted as unlocking in “0.2 seconds.”

Battery performance has been significant on OnePlus devices throughout and the new OnePlus 7 Pro is fuelled by a 4000mAH battery that comes with OnePlus’ Warp Charge, the 30W Fast Charging support, which the company had introduced with the earlier released OnePlus 6T McLaren Edition.

The new Warp charge is said to improve charging speeds by 38%, according to the company.

If you are planning to buy this device I hope this OnePlus 7 Pro Review will help you to know about this great smartphone.