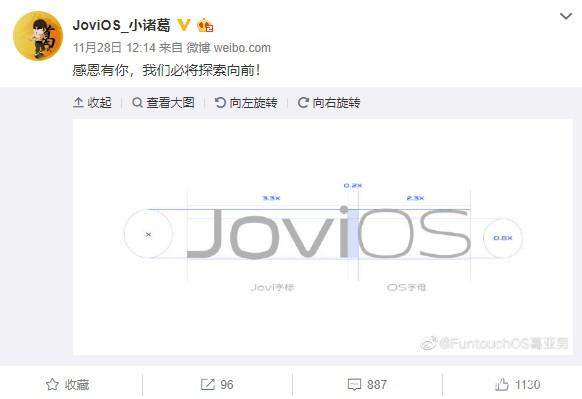 
Ge Yanan, the project manager of Vivo’s Funtouch OS, posted a Weibo. The Weibo picture showed the logo design of JoviOS. , We will definitely explore forward! ”

Later, his Weibo name was also changed from Ge Yanan of Funtouch OS to JoviOS_Little Zhuge. In this regard, Funtouch OS may be replaced by JoviOS.

From the upcoming event of Realme UI and FuntouchO S or changed to JoviOS, it can be seen that UI has become one of the battlefields of mobile phone brands. And even if there are inextricable relationships between brands (such as OPPO and realme), there should be uniqueness in the UI.

The layouts initiated by the two brands, realme, and Vivo, are more likely to be based on UI construction considerations.

The system is the core part of the mobile phone experience. With the increasingly fierce competition of smartphones, users’ requirements are getting higher and higher. Users need not only a good-looking UI but also comprehensive and humanized system functions, which brings more branding. Challenge.

The key issue is how to achieve comprehensive functions while maintaining a complicated UI without complicated functions.

At present, some users have the following comments on the U of realme and Vivo:

At present, some netizens believe that although Funtouch OS is more comprehensive in functions, such as in the intelligent scene service, it provides more prompt management such as itinerary. It is not a simple capture of order text messages, giving users more peace of mind. The user’s look and feel are not so simple, and the functional logic also feels chaotic.

This may be one of the reasons why Vivo improved the UI and even changed the name completely.

Realme faces different problems. Realme phones that currently use ColorOS have a little problem with the simple design of the UI. This is mainly due to ColorOS ’” borderless “design concept.

However, the realme user group is not exactly the same as ColorOS, and the functional requirements of the system are also partially different. ColorOS still needs to be improved in terms of functions.

For example, there are relatively many young male user groups in realme, and there is a high demand for the developer mode of the system. ColorOS will resident notification in the notification bar after turning on the developer mode, and realme X canceled this feature in subsequent updates. , But the response speed is still slow after improvement.

In fact, Vivo has similar problems. At present, the Vivo sub-brand iQOO uses Monster UI, and with the future change of Funtouch OS to JoviOS, what will Monster UI do next? Is it similar to realme UI? Make more independent improvements to create differentiation. This is something that Vivo needs to consider.