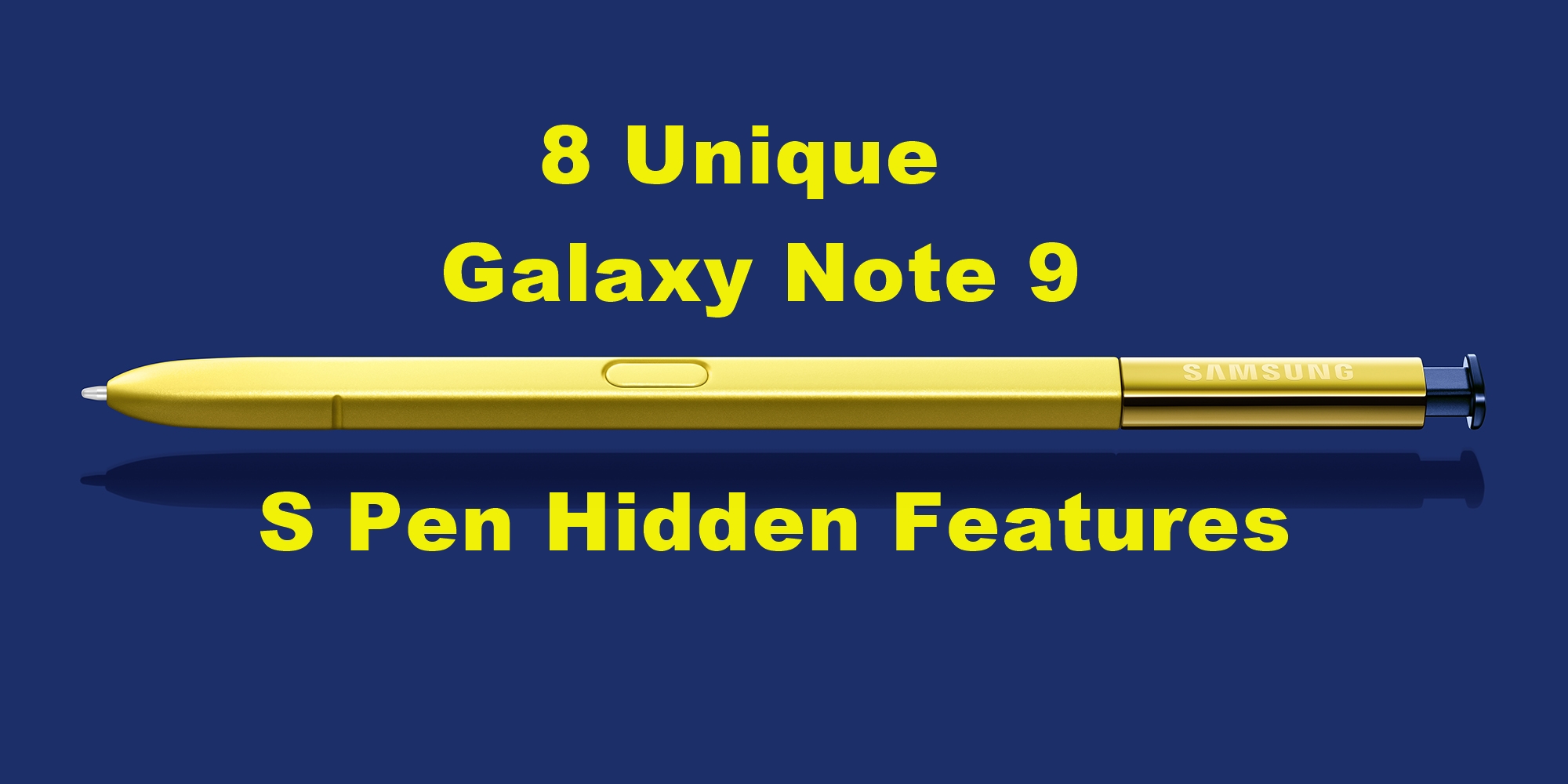 
Hi everyone so after knowing the One UI hidden features of the Galaxy Note 9 after some time to dig down into the settings in order to find some interesting and hidden S Pen features that you can not easily find and I came up with 7 interesting ones. Here we are talking about Galaxy Note 9 S Pen Hidden Features.

For the first time ever, the S Pen harnesses the power of Bluetooth technology, acting as a remote for your Galaxy Note9. Snap photos, change slides, and pause YouTube videos with a press of the button — or set your own custom controls. Then, charging the S Pen is as simple as sliding it back into the Galaxy Note9 to get another 30 minutes of power in just 40 seconds.

The first one is a trick that you cannot find in the setting and it is about taking notes. Usually to take a note– you open the S Note app the write whatever you want but this trick will let you do it faster.

If you are on the Home screen you can actually hold S Pen button then tap twice anywhere on the display the S Note app will be open it, so you can quickly check your note then you can save it and close. This also work on the Note 8 so go ahead and try it if you have one.

Well if you press and hold the S Pen button while the screen is off then tap on it once, you will get the off memo display so you can write and save your note.

The third feature is great wine combining Bixby with the S Pen. Did you ever want it to translate or extract text from a paper that you’re holding or assign yourself on the street. Well Bixby Vision combined with S Pen will let you do it maybe you’re holding paper and a menu in a restaurant using the S Pen select Bixby Vision from the air command then open the camera app and just hover the S Pen over the wanted paper or object without taking the picture you can then select the text you want then choose the text option, Bixby will extract it here for you then you can choose to either copy and paste it anywhere or to translate it there to any languages this also work if the picture you want is in your gallery or on the web too.

This also comes very usefully when you want to scan QR codes directly from a web page. You just over the S Pen hover the wanted code, Click the QR code icon there then it will give you the scanning result without opening any camera app. To activate Bixby Vision on the S Pen> Click the Bixby Vision from the air command then click the setting button that appears on the top then activate these search targets.

The new S Pen is all about remote controlling your phone, one of the Handy feature is to unlock your phone by tapping the S Pen button.

Let’s say your screen goes off while using it you can just click the S Pen button to unlock it. To activate this go to the settings> Advanced Features> S Pen> Unlock with S Pen remote and activate it.

I think by now you might already know about the new S Pen features from opening the camera app by holding the button photos, play & pause songs, Move Power Point slides and more.

But if you open one of the S Pen remote supported apps then hover over the air command you will get a glimpse of what the S Pen button is configured to do on that app. Just like Google Play music app, from there you can open air command and go at the bottom to change the configuration if you like.

Web pages one of the apps you can remotely control with the S Pen is Google Chrome. If your browsing the web and you want to go back to the previous page or the next one you can actually click the S Pen button once to go back or click it twice to go forward this a handy feature for faster navigation. To activate this go to the Settings> Advanced Features> S Pen> S Pen Remote and activate Chrome then you can configure what the single and double press does for you and while you are navigate the web you can choose to configure the button to scroll down or up on the web page.

Last but not least a bonus feature that is easy to find but pretty useful it is launching the Google Assistant when pressing and holding the S Pen button instead of the default action of launching the camera app you can set it to do so by going into the Settings> Advanced Features> S Pen> S Pen Remote> Hold Down Pen Button option from there you can choose the Google Assistant app.