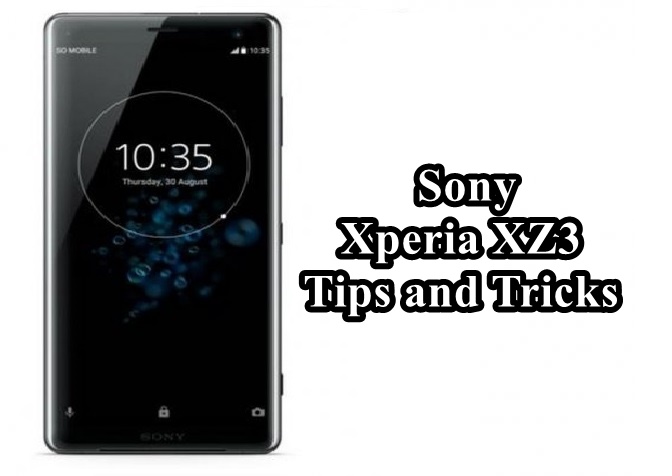 
You will be able to Learn top 8 Sony Xperia Xz3 Tips and Tricks. Today we are here with Detail guide on  Sony Xperia Xz3 hidden features. As we all know, it’s not the hardware specs alone that define a phone. The software also plays an important role in making it a complete experience.


Samsung and Apple tend to be the first two brands you think of when it comes to flagship smartphones, but there are plenty of other excellent Smartphones available. For example, Sony just released its latest trio of flagships, the Sony Xperia Xz3. The Phone comes with a good feature gorgeous design along with high-end hardware that can easily compete with any major flagship.

If you want to record Matrix-style slow motion video the Sony Xperia Xz3 has an awesome feature built into its camera. With Super slow motion, you can record short bursts of video at 960 frames per second (fps).

If you’re new to the world of Sony’s smartphones, the Xperia Assist feature is always the best place to start, and on the Sony Xperia Xz3 Compact, it’s received a considerable revamp.

Tap the icon that sits front and center of your default home screen or dive into the settings menu and looks for ‘Xperia Assist’ to get started. Once you’ve plugged your name in, the new chat-style interface makes it easy to find out what your phone can do and any tips it pushes your way are then logged under the inbox tab so you can refer back to them whenever you want.

Hate having the App Drawer button waste precious space in the app bar? You can easily remove it in just a few steps.

If you want to enable or disable the App Drawer button, long press on the home screen and tap Settings. Adjust the toggle bar next to Enable swipe up to your desired preference.

The Sony Xperia Xz3 Compact may pack in a sizeable 6-inch display but the new 18:9 aspect ratio means it’s really just taller than its predecessor but no wider. Aside from bringing the design up to date, that does also mean that reaching the top of the interface with a single mitt is even trickier than before.

Luckily Sony has finally implemented a proper one-handed mode in a similar style to that of Huawei. It should be enabled by default but if not, you’ll find the option to switch it on within the ‘Interaction’ section of the phone’s display settings. Once enabled you simply have to swipe across the navigation keys to shrink the UI down for more manageable interaction.


Whilst shrunk you can tap the arrow key to switch which side the UI is justified against, drag the chevrons at the corner to resize it or grab the parallel handles to move it up and down. Then just tap on any blank black space when you’re done, to scale everything back up again.

This is the first Compact phone to boast HDR visuals and the 2160×1080 Triluminos display really is a thing of beauty. If you don’t like exactly what you see though, Sony has afforded users a ton of controls to tweak the viewing experience on the Sony Xperia Xz3 to your preference.

Head to ‘Display’ in the settings menu and you’ll find a host of options worth tinkering with. ‘Smart backlight control’ ensures the screen stays on when the phone detects that you’re looking at it, ‘Night Light’ turns your screen amber to make late night or low light viewing easier on the eyes and can be set to a custom schedule or sunrise and sunset, whilst the ‘Quality’ section of the display settings covers everything from color and white balance to video enhancement.

Just swipe around in there until you’re happy with how the Sony Xperia Xz3 Compact displays the content you love.

While there are a lot of questionable apps that ship with the Sony Xperia Xz3, the 3D Creator app is one we actually enjoy. With 3D Creator, you can easily create 3D scans of people and objects.

If you want to create a 3D scan, simply open the app and tap the 3D icon. Select the type of object you wish to scan and press the Tutorial button. The first time you take an image you’ll need to calibrate the camera, and you can do so by moving the camera around the object and connecting a series of dots. To get the best scan, you’ll want to capture the scan in an evenly lit room: You’ll know you’re in good light when the lightbulb icon has more than two rays.

For facial scans, you’ll want to remove your glasses. The first time you complete a scan you’ll need to calibrate the camera by connecting a series of dots. For other images, you’ll want to avoid taking photos of glossy or transparent objects. Once you’ve completed a scan you may be asked to further sculpt your scan by moving the camera around in a “figure eight” formation.

How to Install TWRP Recovery And Root Sony Xperia XZ3

I hope to use to understand all article on Sony Xperia Xz3. If you have any problem then ask in the comment box.  We can solve your problem.