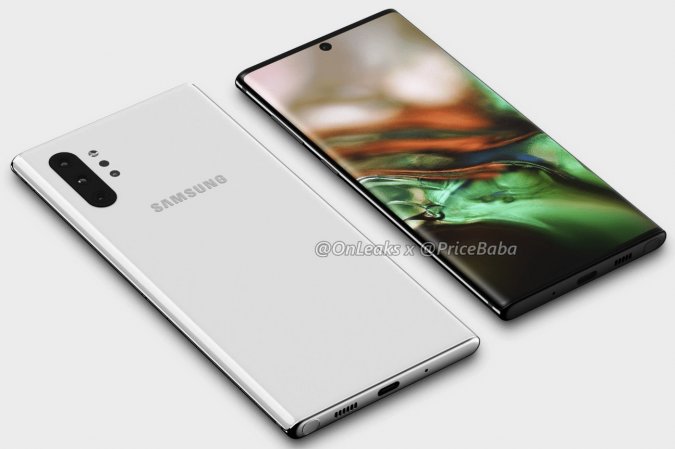 
After a few leaks, Samsung Galaxy Note 10 Pro renders show quad cameras no Bixby button and more. Note 10 Pro, which is one of two smartphones of the future series. Even today, we were shown a second model, called the Galaxy Note 10 Pro. Now we intend to talk about this smartphone and compare it with its younger brother.

Look at the renders – this is what a new device might look like. In terms of design, it has quite a few differences from the standard model. The Samsung Galaxy Note 10 Pro will get a curved AMOLED screen with minimal side frames and a built-in fingerprint scanner. It has the same opening for the front camera as on Note 10, but the diagonal of the panel is noticeably larger – 6.75 inches.

There will be 4 lenses in the back of the main camera, and a more affordable device will have three. They are placed vertically in 2 rows, and its capabilities, according to rumors, will be borrowed from the Galaxy S10 5G. If true, one 12-megapixel sensor will be equipped with a variable aperture, one 12-megapixel ultra wide-angle optics with a 123-degree coverage angle, 16-megapixel with an optical approximation (2x) and one time-of-flight sensor.

Among the shortcomings can be identified the lack of a traditional 3.5 mm audio jack, so the user will have to buy wireless headphones or an adapter with a 3.5 mm USB Type-C.

The main innovation will be the processor. Galaxy Note 10 was tested in the Geekbench benchmark with the Exynos 9825 chipset, which has not yet been officially announced. Its advantage is reportedly in manufacturing technology. If the Exynos 9820 is manufactured using an 8-nanometer process technology, then the new 9825 will be 7-nanometer, like the Snapdragon 855.

There is a reason to believe that the new product will appear either in late August or early September 2019. Price Samsung Galaxy Note 10 will be more than $ 1,000.