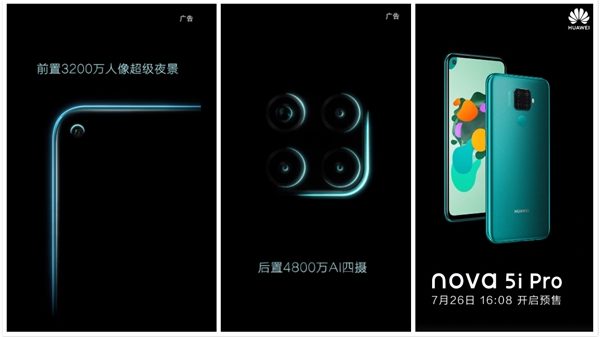 
Over the past few days, Huawei nova 5i Pro has already managed to shine on the “live” photo and in the hands of a popular Chinese actress during testing self-camera. Now the turn has reached the official announcement, the date of which was named by Huawei itself, which published the first official teaser of the smartphone.

The short video was published in the official Huawei account on the Weibo social network. The main camera of the smartphone is represented immediately by four sensors, the resolution of which, according to information from the Chinese regulator TENAA, will be 48, 8, 2 and 2 megapixels.

The device with a 6.26-inch display and the latest Kirin 810 processor is credited with 8 GB of operational and 256 GB of internal memory, a 4000 mAh battery with support for fast 20-watt charging. Selfie module will be located in the area of ​​a round hole in the display.

The presentation of Huawei nova 5i Pro will take place on July 26, in the Chinese market the novelty debuts as Huawei Mate 30 Lite.