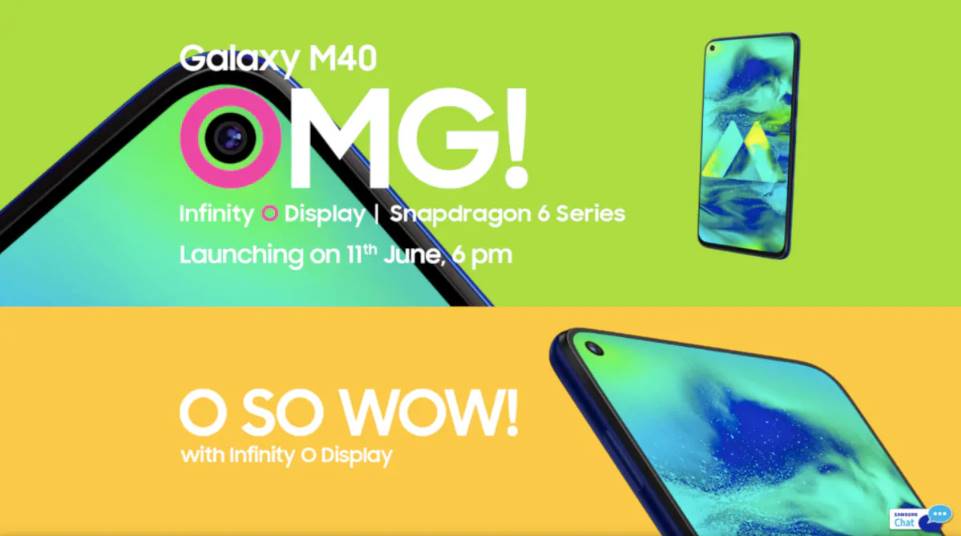 
Samsung Galaxy M40 will be made official on June 11th but we already know how it’s going to look like. It’ll be a rebranded version of the Samsung Galaxy A60 aka Galaxy A8s that was launched a few months ago.

Samsung has created quite a stir in the budget smartphone market with the launch of the new Galaxy M series phones. Not long ago, Samsung was the distant number one in the second biggest smartphone market in the world but Xiaomi overtook them by offering high specced devices for dirt cheap prices. Samsung fought back by reshuffling its smartphone portfolio, launch A series and M-series phones. So far they have launched 3 devices in the M series and now they’re about to release the 4th one which will be named the Galaxy M40.

We have the specifications of this handset which will launch on the 11th of June. First up. this is how it’s look. It’ll be a re-branded version of the Galaxy A60 aka the Galaxy A8s that was launched in China a few months ago.

That means Infinity-O display, triple camera at the back which also means that it’ll have LCD which sucks because the Galaxy M30 offered OLED. So it’s a downgrade in the display department. The display measures in at 6.3″, there will be a Snapdragon 675 processor. This is great news for folks who keep complaining about Samsung’s in-house mid-range Exynos processors. There will be a 32MP rear camera, alongside a 5MP depth and 8MP ultra-wide sensor. The selfie camera will be of 16MP. 6GB of RAM and 128GB of storage as well.

Another area where this device is a downgrade is the battery capacity. The M30 had a massive 5000 mAh battery which was one of its main selling points. But with the M40, you’ll get a significantly less battery capacity of 3500 mAh but the good things is, the M40 will be competitively priced. A high ranking Samsung executive confirmed that they will price this handset around INR 20000 or around $280, which when you consider all of the specs and build quality, is actually a grate value for money handset.

Samsung will launch this on June 11th in India and as for the worldwide availability, if Samsung has launched a Galaxy M device in your county then you can expect the Galaxy M40 as well.